So I've now gotten some paint on my skirmishing javelin men, they kind of painted up the same way as the unarmoured hoplites, but with the shorter javelins I didn't break a single one during painting. So that's a big plus.

This time I also tried something new for me, I based them om single, round bases so they would really look like skirmishers. I plan on using 4 to 6 in a single small unit, depending on what looks best and not too big to represent a small unit, as I only use 2 bases for a small formed unit, 4 or 5 might look the best and still have the overall same size.

I also added some very simple shield designs to this lot of figures, turned out quite ok in the end, it will do at least. 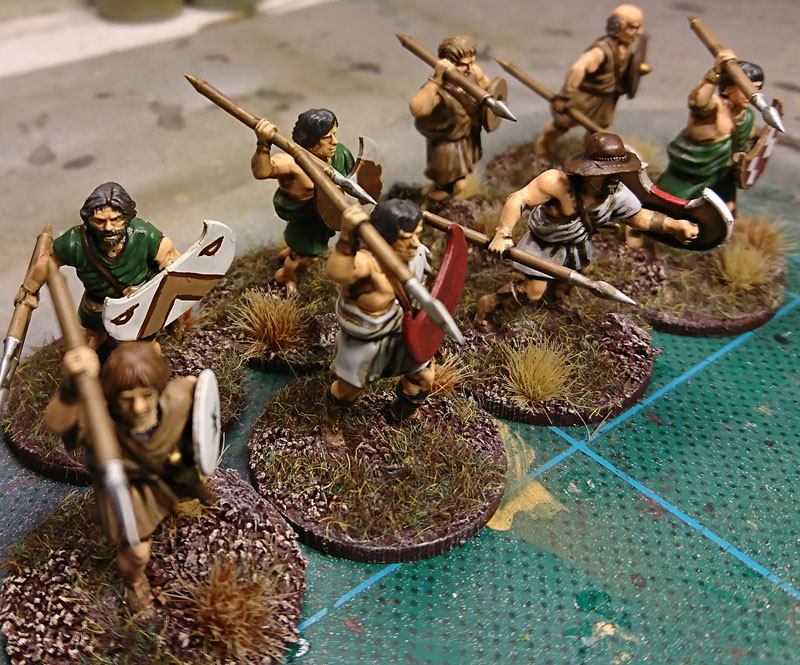 This is the second box that I got from the Victrix line, I thought that this box would be perfekt to represent the skirmishers that I need for my little Hail Caesar army.
A big difference for this box is that there are som pictures on the Victrix homepage so that it's possible to get some inspiration on how to build them and then you could also pick up some of the excellent shield transfers that they have as well. 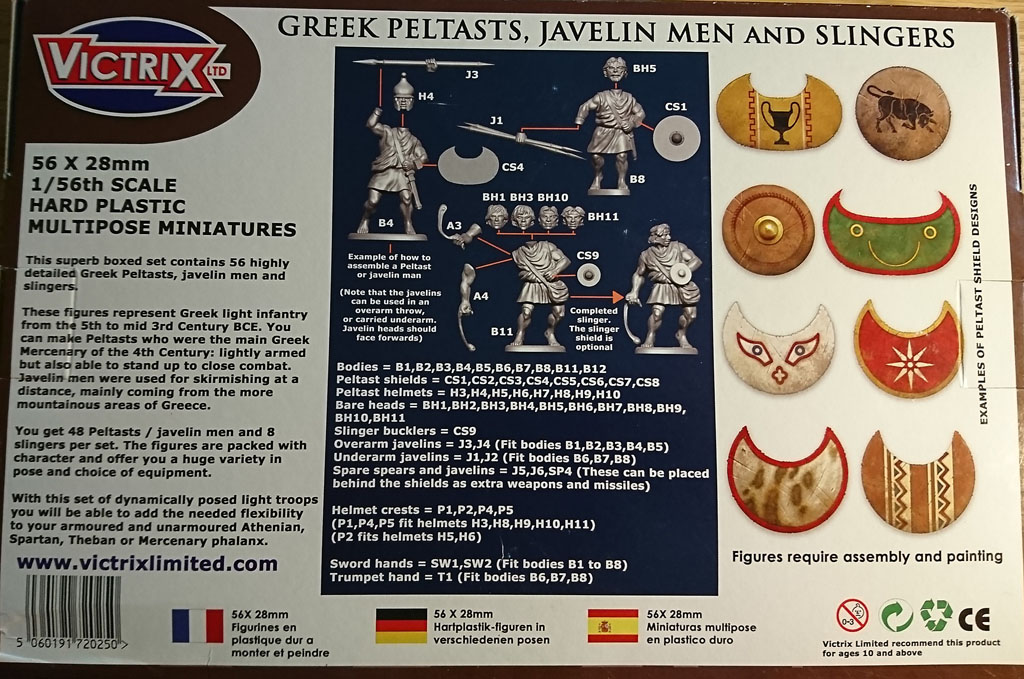 The box itself contains 56 miniatures, where 48 is for Peltasts/Javelin men and 8 slingers so for my purpose it's going to be more than what I need for this. The miniatures are spread out over 10 sprues, 6 of javelin men and 4 with slingers.

When you open the box you are met with a well filled box, lots of sprues, but no building instructions or other information other than what can be found on the box itself. There is not much need for it, and I prefer a lower price point to some leaflet, but I guess it could pose a problem for anyone that's all new to this miniature thing or the period as how to use them. 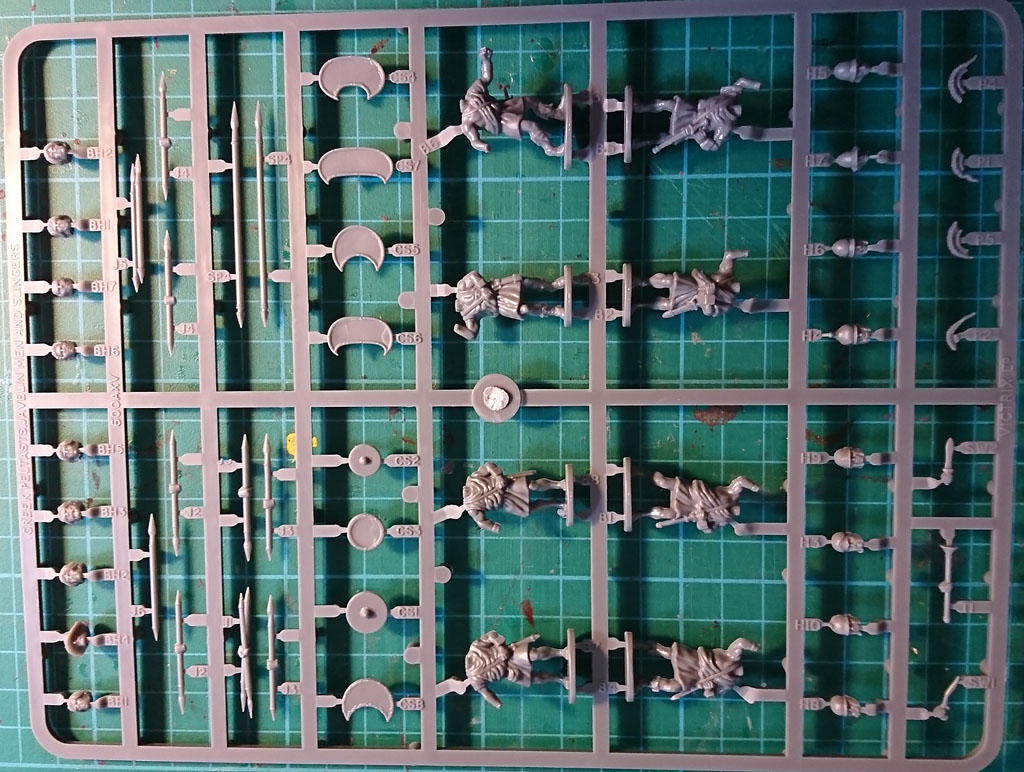 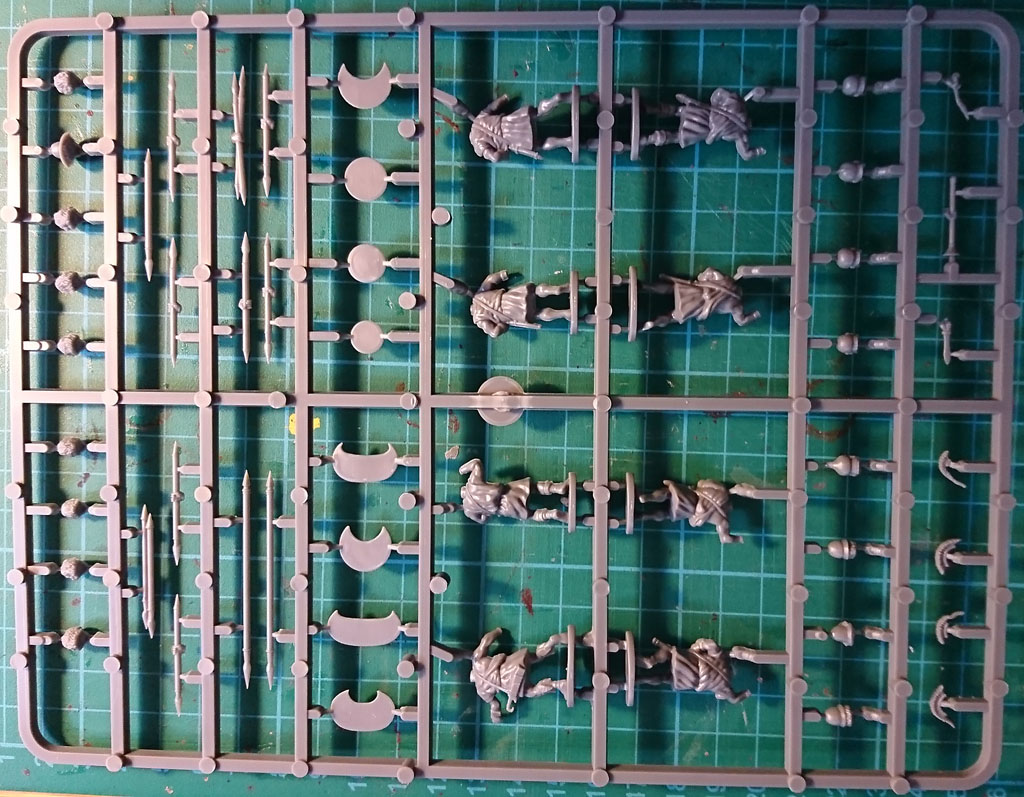 The sprue is more or less the same as the Unarmoured Hoplites, the thing they have done is replace about half the sprue where the hoplite shields, spears and heads is and changed the shields, replaced the spears with javelins and some heads with no helmets.
This then leds to the same problem I had with the hoplites, the connection that the hands has with the arms. The plastic is the same as before, and I had the same problem getting the hands to stick. But the problem was not quite as large here as the javelins are much shorter and not as prone to get stuck in every thing.
As much of the miniatures are the same, the statements I did about the hoplites still stand, the bodies are good, the clothing a bit odd in a some cases, and it's a nice assortment of parts that you get on each sprue. The unarmoured heads are nice though, there are som good variation here, and you get 9 heads a sprue, giving you some spare and there is nothing stopping you from using some of the helmeted heads. The new javelins are ok, they are on the thicker side of things, so they should hold up to gaming, but if you want more realistic sizes to things you should think of something to replace them.
One thing to note when you put these together, and that is the shields, they are supposed to have the flat side out, not the one with a rim, that's the inside. I knew of this and still got one of eight wrong, so keep this in mind. Especially if you get the Little Big Men transfers, I've heard that they will not fit at all if you do it the wrong way around.

The slingers comes 2 on each sprue with a choice of a few heads and sling arms. They are nice and looks good, and the left over heads could provide with a few more choices on the rest of the miniatures.

The kit then is good for what it is, a lot of miniatures for a cheep price, I give this set a 3 out of 5 javelins. You get what you need, and you get quite a lot of variety in poses and looks. But it's not the greatest thing you have ever handled.
Posted by Unknown at 14:08 No comments:

So I've now completed a unit of the Unarmoured Hoplites that I did a review of here.
Apart from the problems of getting them to hold together they turned out quite fine, the cloth was a bit odd I think on a few of the sculpts, but it was well defined and took inks well.

They will make a fin addition to my second division of hoplites.
I now have some Skirmishers on my painting table also from Victrix, a review of that box will come shortly. 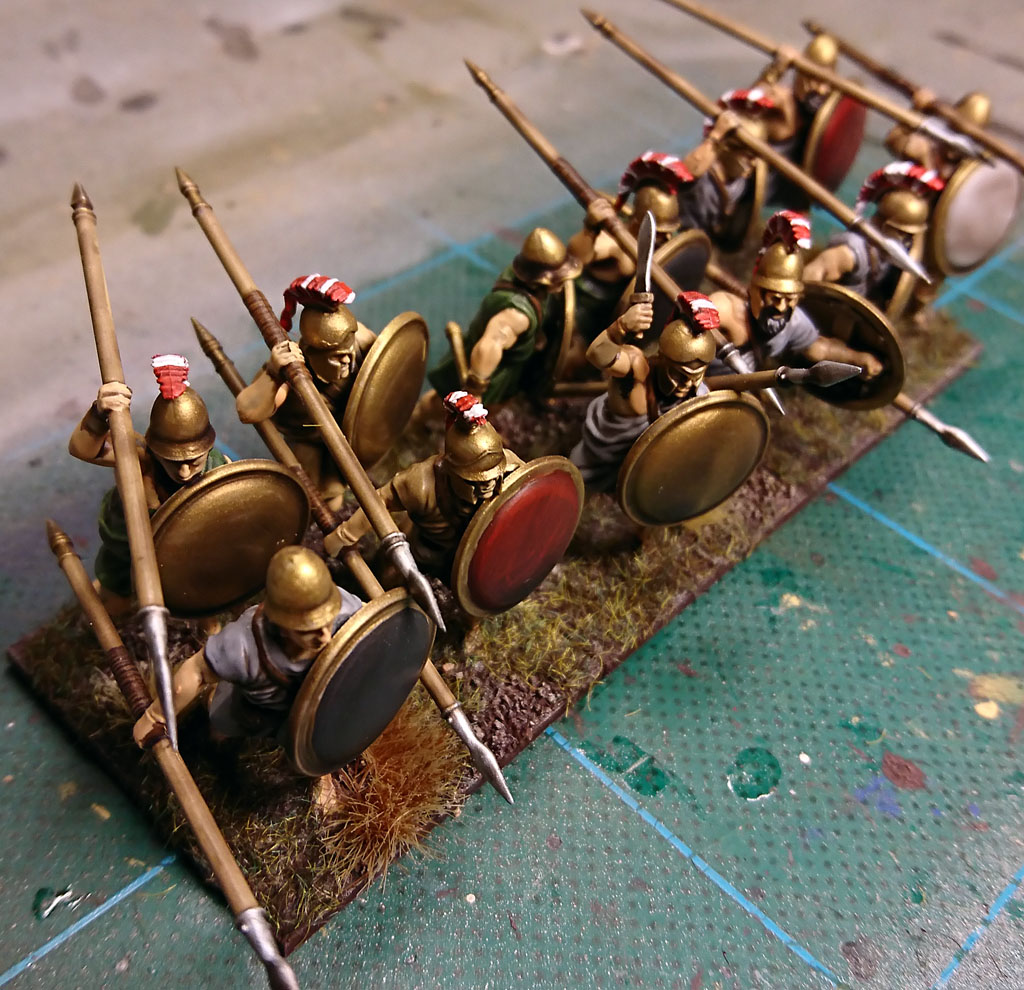 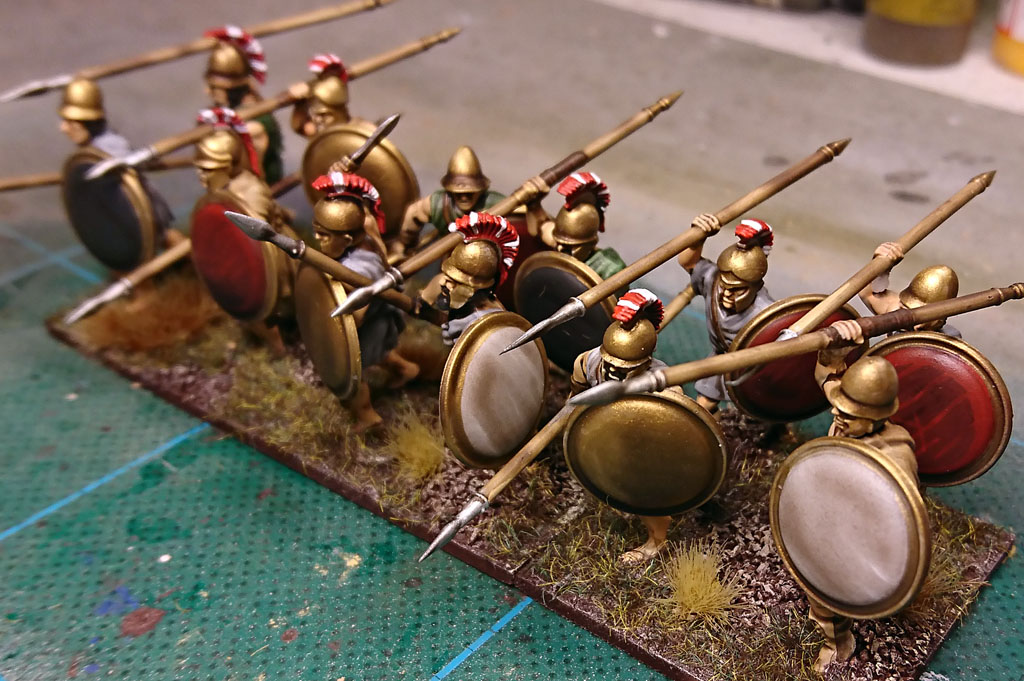 And here is the grand total of hoplites so far, soon there will be enough to play a small game against my romans. Notice also that they have been based now!

After having painted all the Warlord Hoplites that I had, I got an order in for some more, but since I wanted something more than the rather simple one from Warlord, and I wanted some more variety I got myself a few different boxes from Victrix.

The first one I cracked open was the Unarmoured Hoplites and Archers, since I had a hard time finding any sort of information on them when I look into them at first, I thought that I would at least do a simple review of them if anyone else has the same problem.

So first things first, the box contains 56 miniatures and 48 of them are hoplites and 8 are archers. The hoplites comes on 6 identical sprues  each having 8 different bodies and a bunch of extra parts, heads, spears and shields. There is also a trumpet, some hands with swords and helmet crests to add to some of the heads, not all crests will fit all heads, and not all heads can even have one. 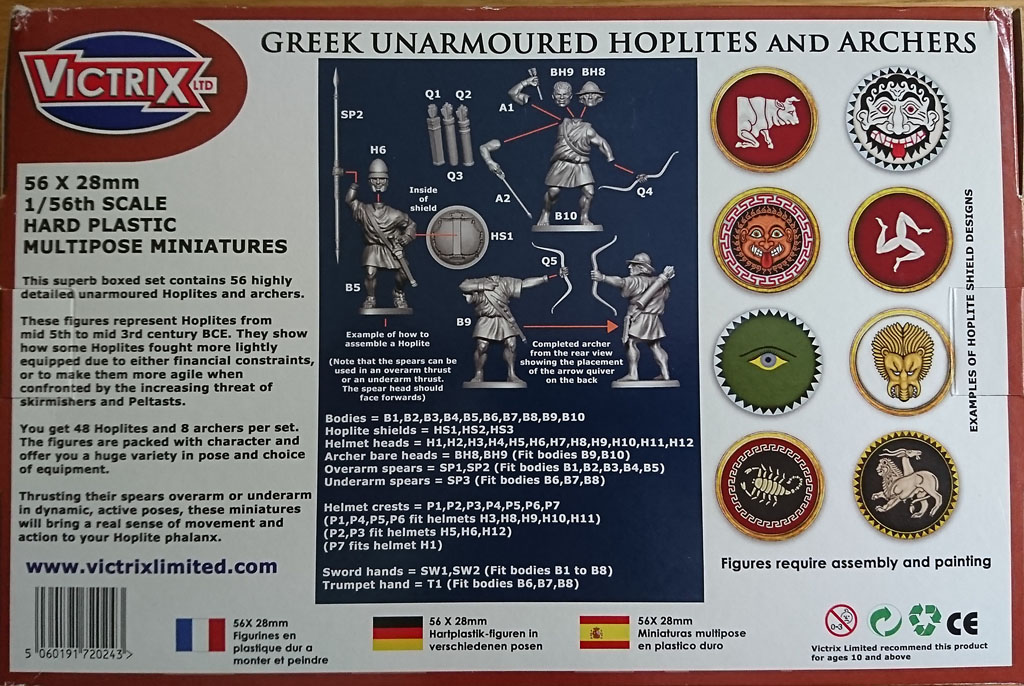 There is no separate building instructions for the minis in the kit, only what you can read on the back of the box, perhaps not the greatest thing ever created, but if it gives me a few more minis for my money then I'm fine with it

Overall the hoplites are all right, the details are mostly ok, and there are not to much flash. There are some lines running down all around the miniatures, and since they show quite a lot of flesh they are very prominent if they are not removed. Same goes for the spears and heads, but here they are better placed so does not present as much of a problem.
The plastic used is a bit strange, it glossier than any other Victrix kit I have handles before, and does not take as well to the plastic cement I used to put them together, perhaps I got an odd package or there have been a change in the plastic. 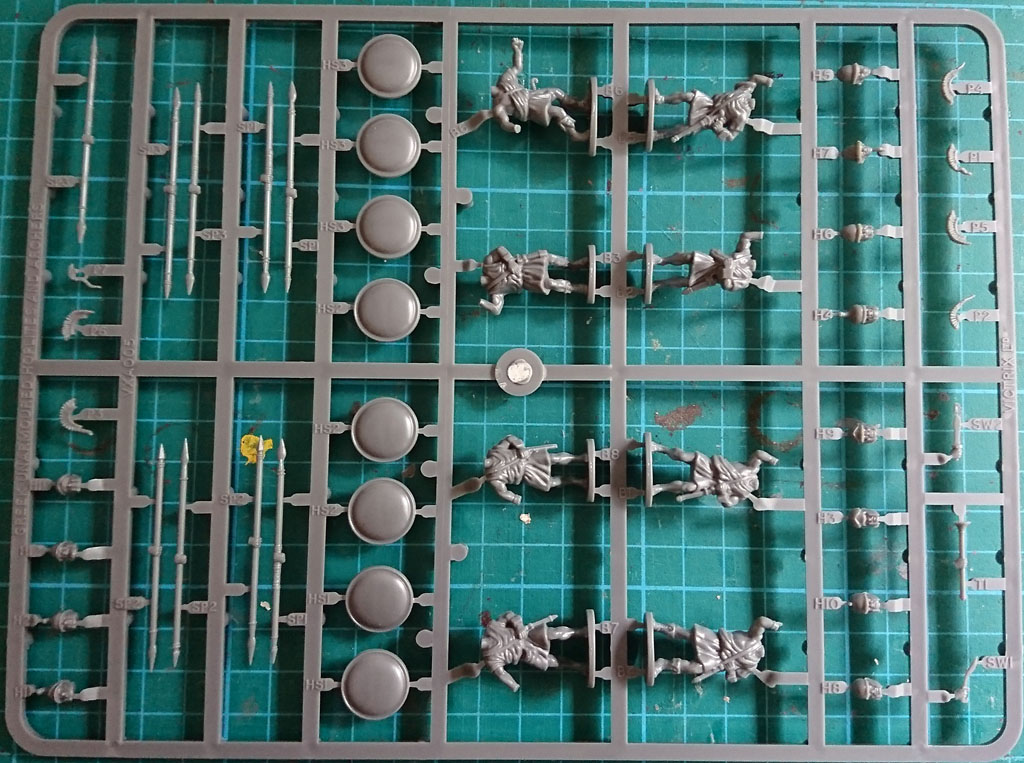 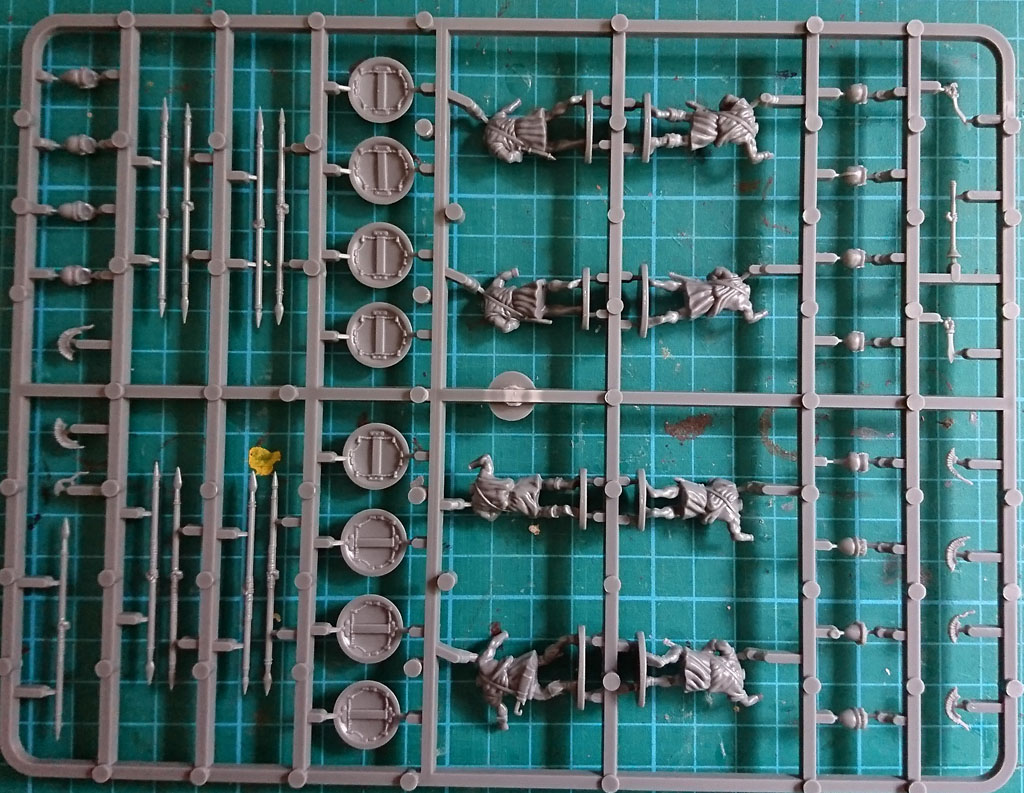 This presented a bit of a problem for me, since the spears are added on with the hand already on the spear and the connection point is therefor really small, and well, they have spears sticking out everywhere, so during painting of the first 12 I think I've broken of every single spear (and associated hand...) at least once. I think I'll need to pin the next batch... Not a prospect I look forward to.

Then we come to the quality of the details, they are good in most part, the cloth is a bit weird I think but the faces and everything else is top notch.

The archers are nice as well, they do have the problems with attaching the hands, but the bows are significantly smaller so should not pose the same problem with breaking of all the time. I also think the cloth is better sculpted. 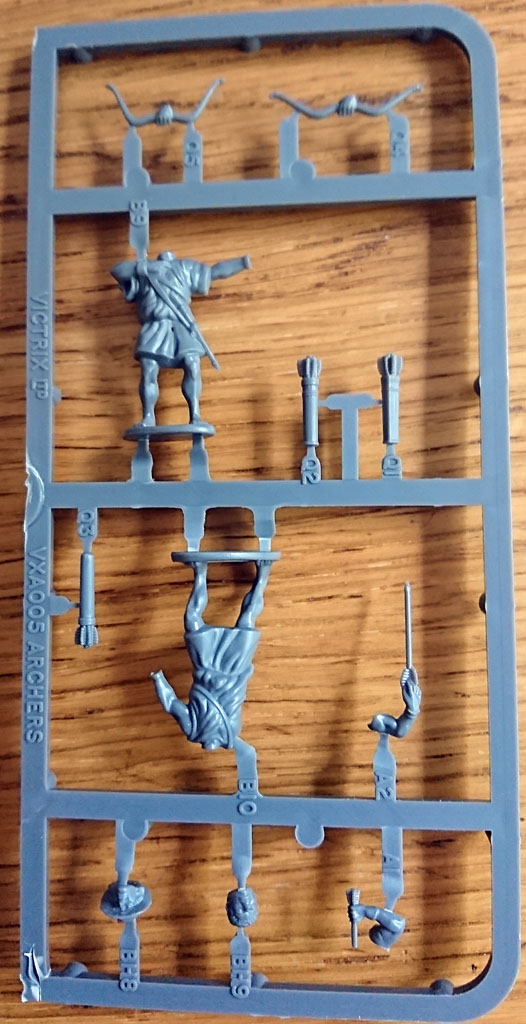 All in all I give this kit a solid 3 out of 5, not the greatest thing I've handled, but good enough for a massed army and by far the best alternative that I know of for this kind of miniature.
Posted by Unknown at 15:54 No comments:

And so we have come to my last batch of Greek Hoplites for this time, more or less the same as last time, just with red shields this time around. It´s still the Warlord miniatures. 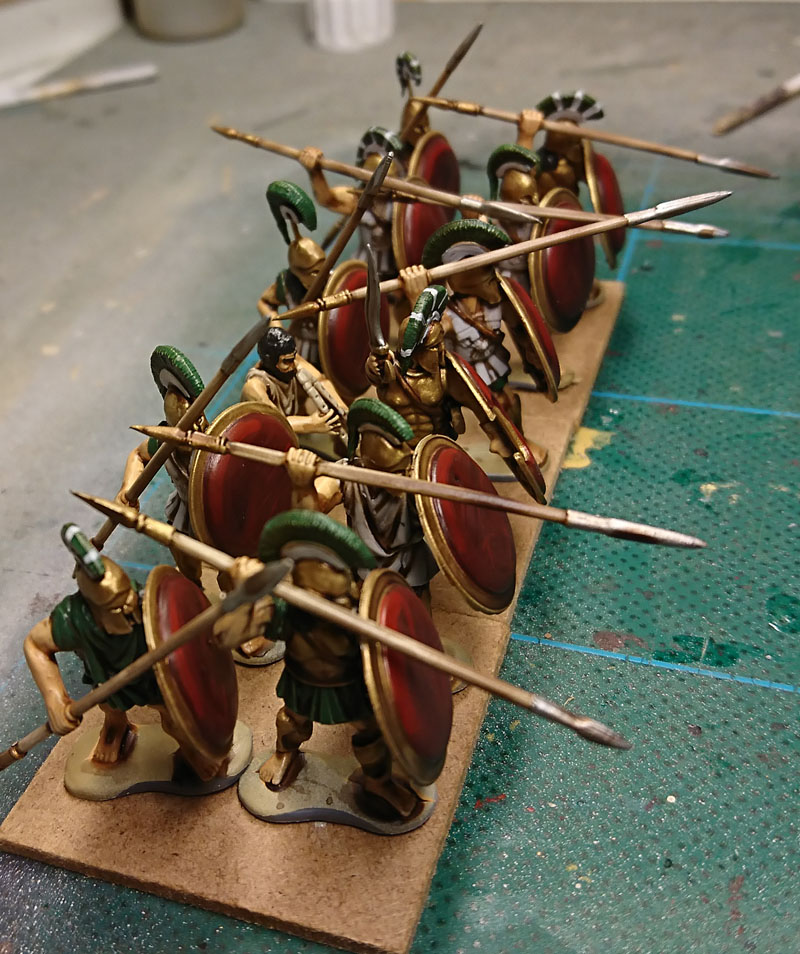 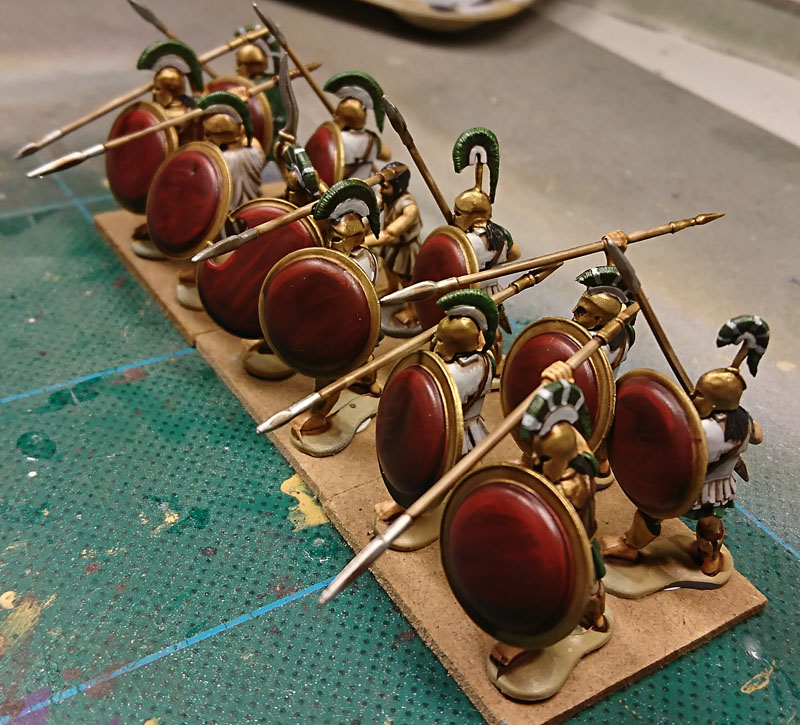 And then we have them all, just before I started basing them, a projekt that has not gone beyond this stage as of writing this... 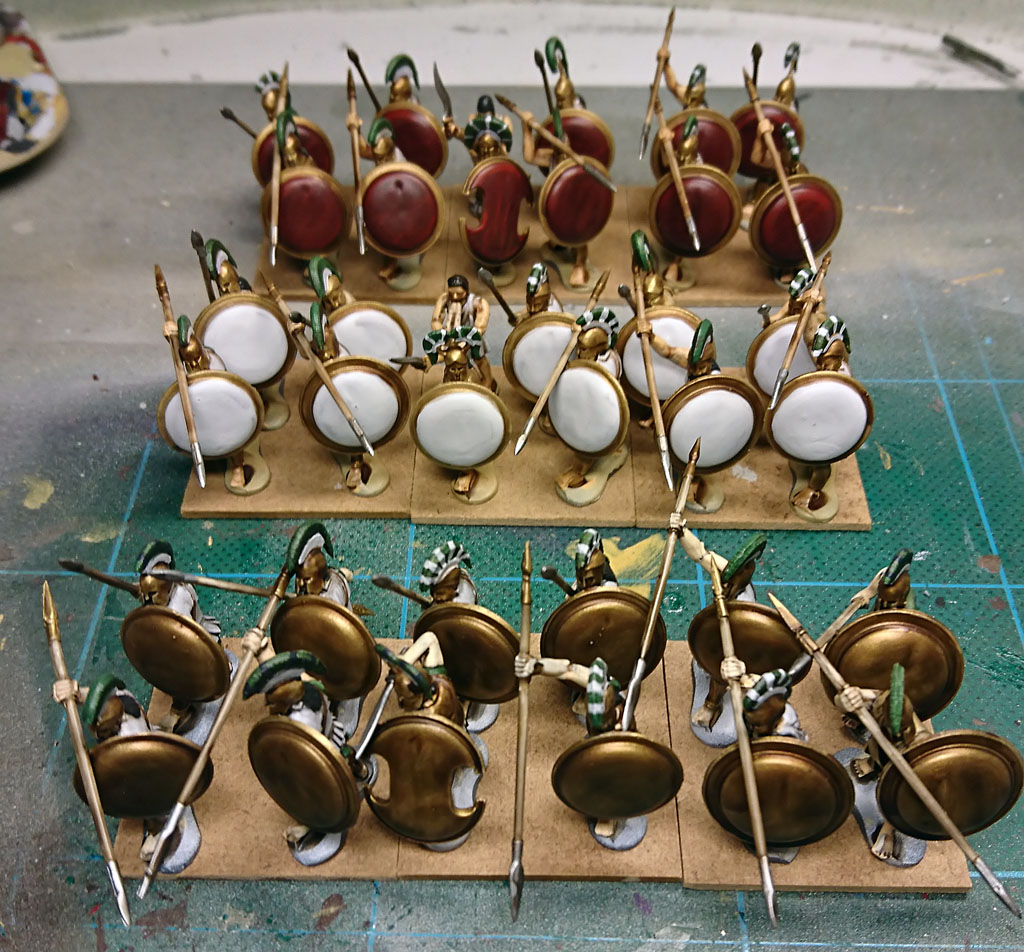 Going back to my soviets, I here have a infantry company, almost complete just lacking some of the optional heavy weapons that you are able to add to the formations.

But this is a quite hefty bunch of troops, and it you want them all in transports you need 12 of them... I'm a bit behind with my small unit of 4.

As of quality, this is the metal infantry that got released just after the launch of the main rule book and it's supposed to be replaced soon by plastics (by the time of writing this, there is some delay and they are scheduled to be released some time in november of 2017). And the quality is... so and so, the details are just fine, but a lot of the figures got deformed legs, huge flash bits and quite a few had damaged weapons, most was repairable but there are a few broken barrels and legs and feet that has been hidden by base materials.
But they are quite small, and quite a few of them on each base, so you have to look real close to see the mistakes. 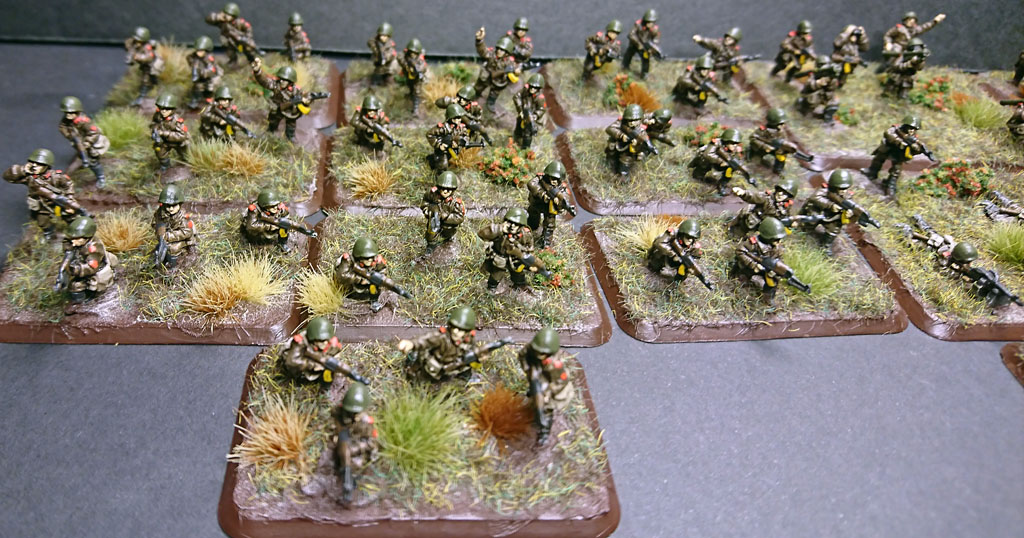 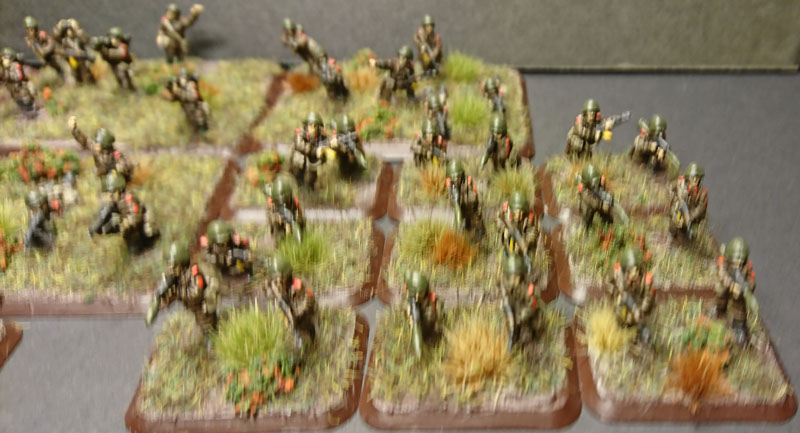 So, I had a few more of Warlord Hoplites, so I got into painting them as well. The colors are all the same, I just changed the facing on the shields.
So far I haven't decided yet if I want to keep them in units with the same shield colors, or if I should mix them up a bit 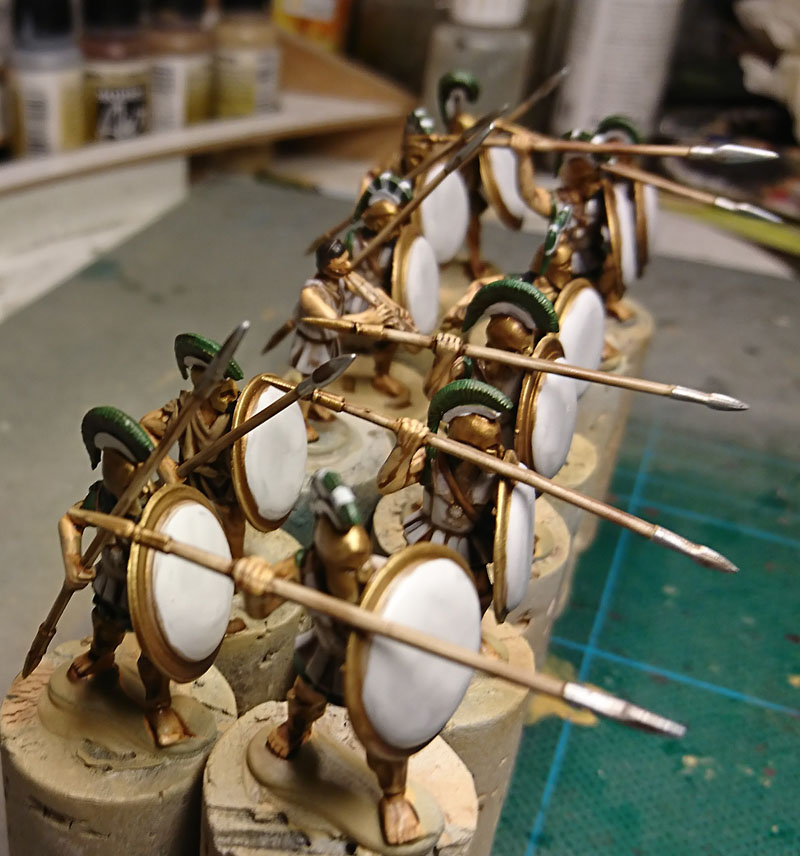 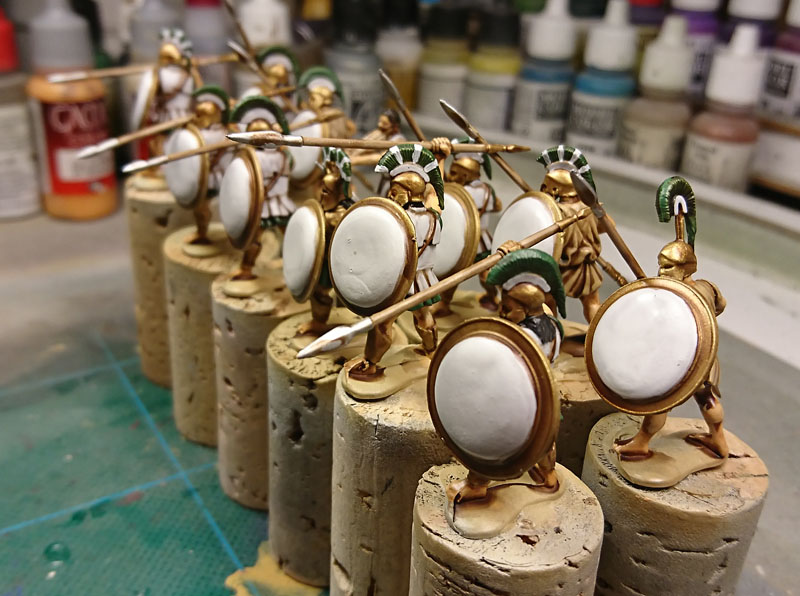 The force so far on temporary bases