About a week ago we got together to play a game of Bolt Action, for my part it was quite a long time since I last played, and most of the rules was rather foggy...

But anyway, we got together and I brought US marines and I faced of some German grenadiers, the armies were roughly:


All troops were regulars and a veteran Sherman.

We played the maximum attrition mission. I left the Greyhound and flamer in outflank reserve and the Germans left most squads and tank in reserve, with one squad outflanking.
The table was beautifully set up by our game master that was mostly there to look, drink beer and hand out dice. 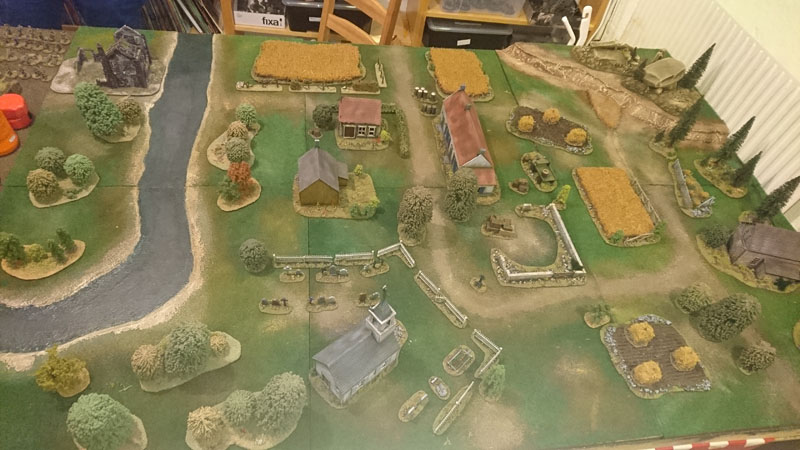 The first turn started quite uneventful as the Americans poured into the table as there was almost no Germans that was to enter, only our snipers go any targets, the German could not hit a thing while mine hit the one squad that entered the table, but could only manage a pin on them. My Sherman threw a few shots over at the mortar spotter that was deployed from the start, but could not hit anything. 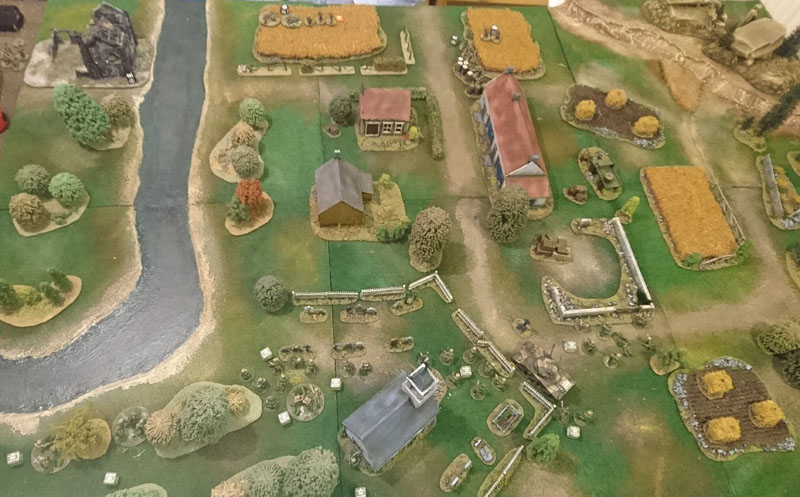 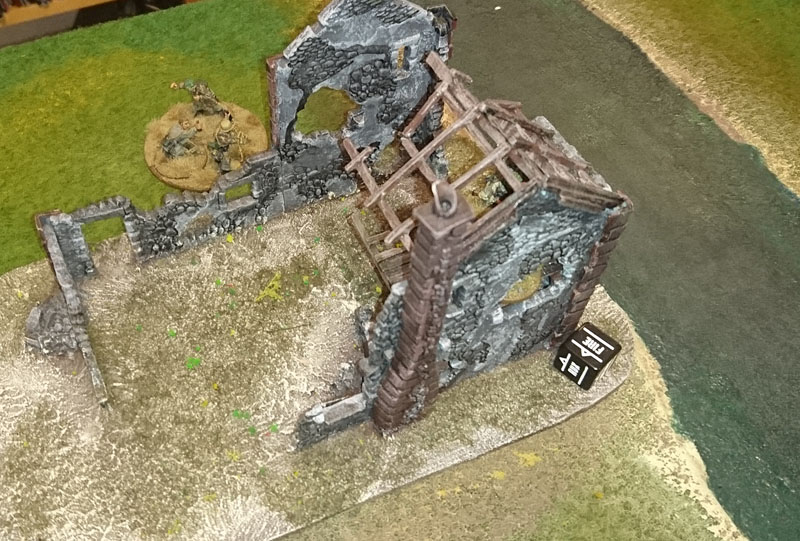 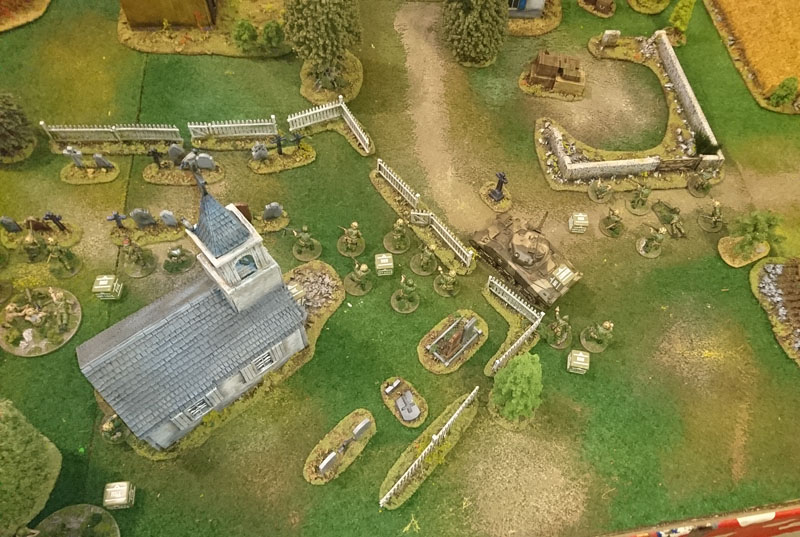 During turn two a bit more happened, firstly the StuG made its presence known and bombed one of the US squads, killing a few of them and piling on quite a few pin markers, and in the center most of my army that could, fired on the first squad that had entered the table, killing of over half of it and pinning them good. Other than that there was some general advancement on the US side and some ranging rounds fired by the mortar. 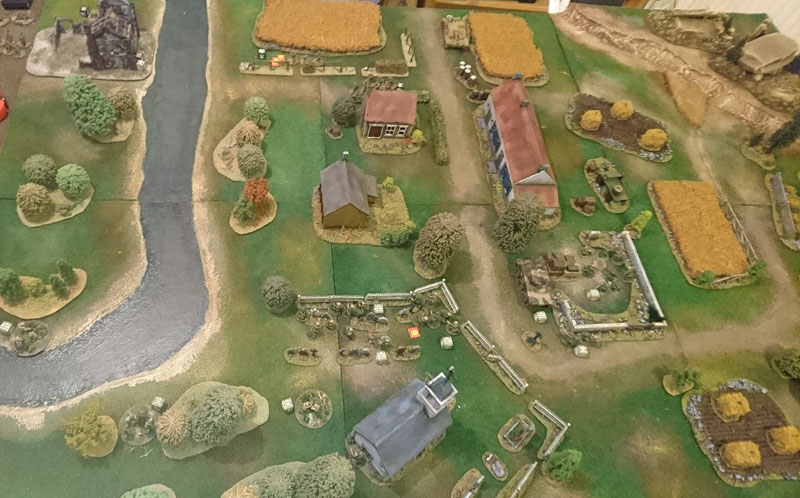 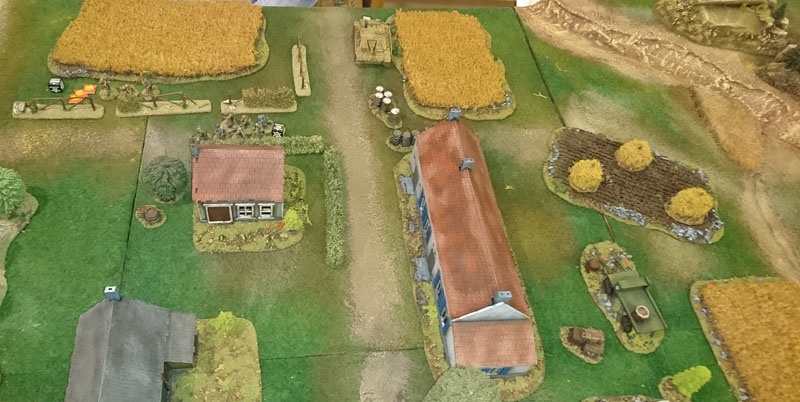 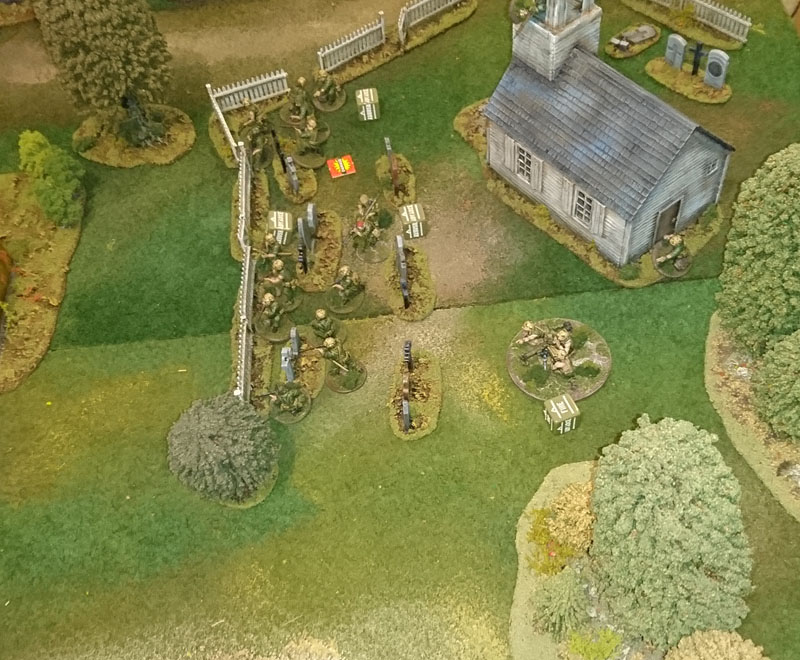 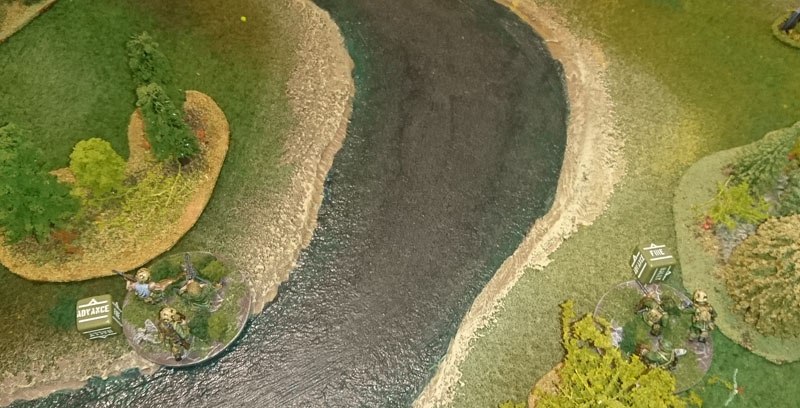 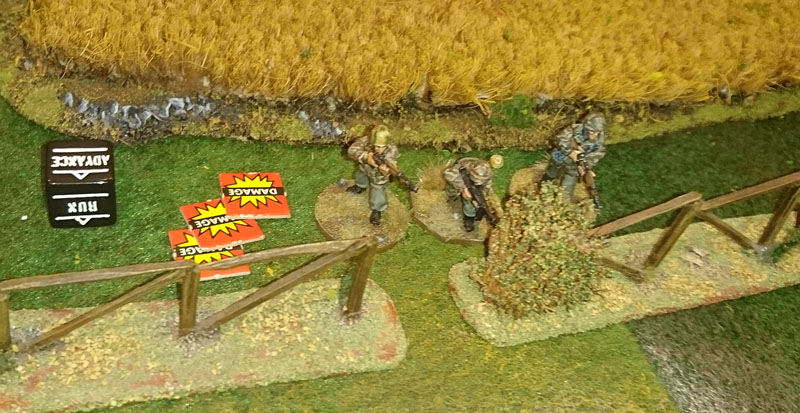 Turn three came around and now the outflanking troops started to arrive, first some more grenadiers arrived in the German back field, and they punished one of the US squads that got to far up the right flank, killing of over half of them. The StuG continued to fire on the poor marines and they kept their heads low, still losing men and getting more pins. My Sherman tried to knock it out, but could not hit it. In answer to that the panzerschreck arrived but they weren’t able to hit the Sherman either. The German sniper started to earn his pay and knocked out a MMG team.
In the center one squad and the medic advanced and took aim at the house on the German side. Now this was filled with a German squad that was intent on making life hard for the Americans. But good shooting left the squad severely reduced. 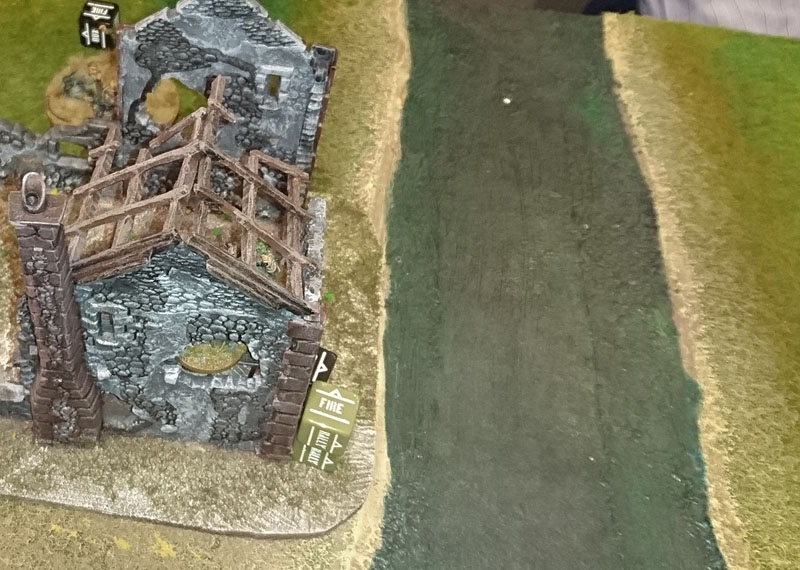 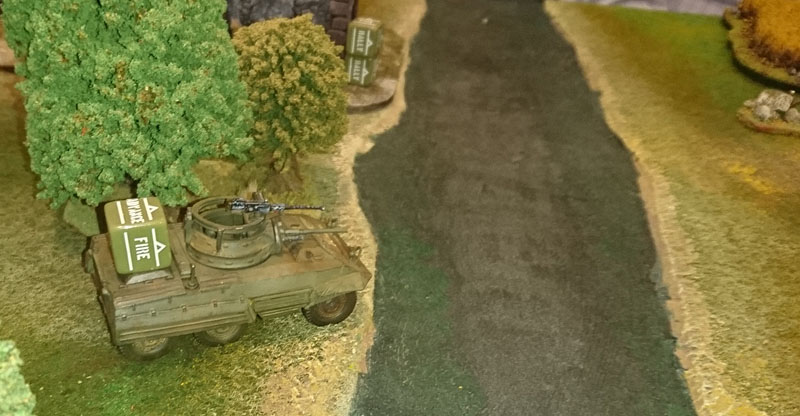 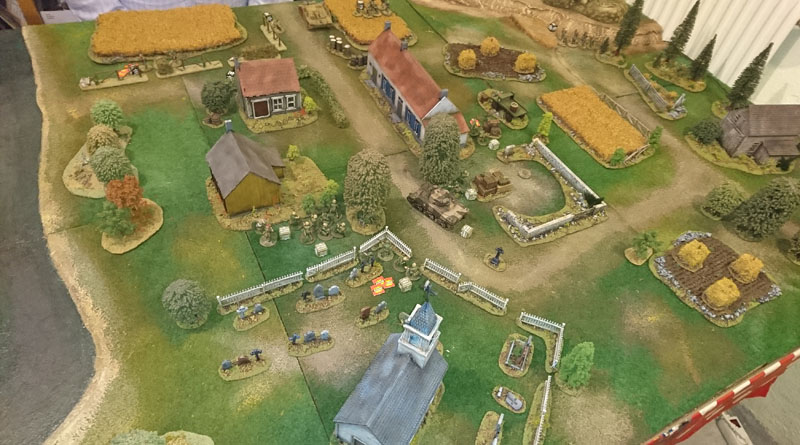 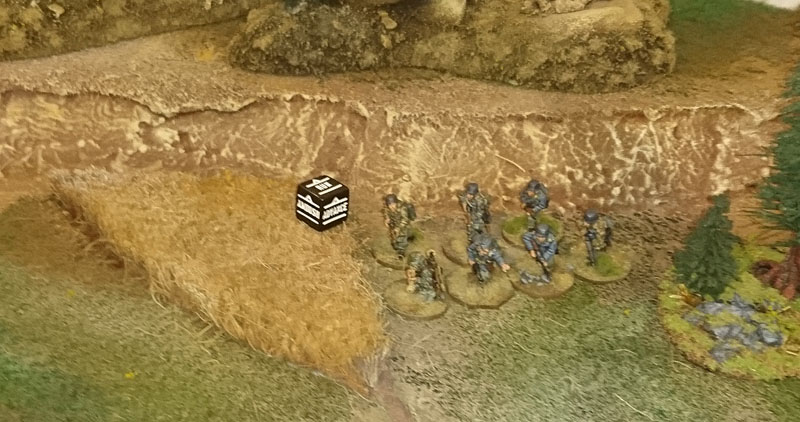 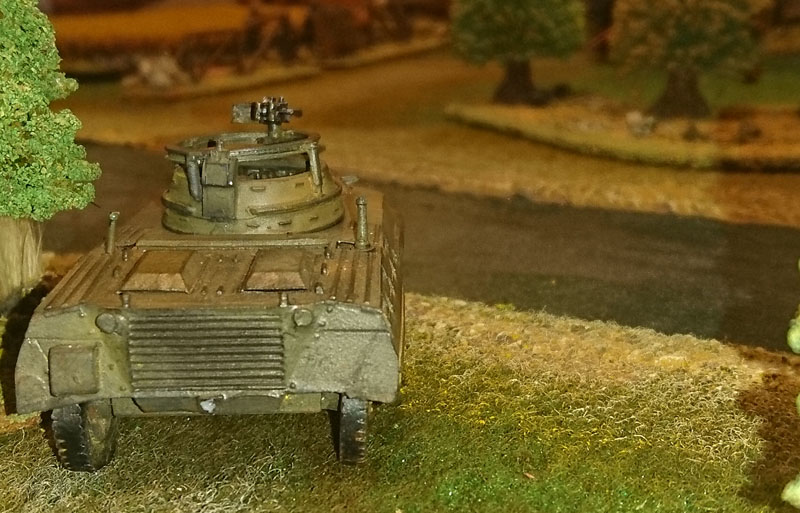 On turn four the luck ran out for the StuG, and a 75mm shell from the Sherman hit the fuel tank and set the whole tank on fire, the crew that was not instantly cooked, bailed out. On the left side, my mortar found its target and blew the sniper up, and arriving from outflanking was my flamethrower that burned the German mortar to a crisp. Some more scattered firefight did happen over the board, but nothing that went to the German favor. So here we called it for the Americans. 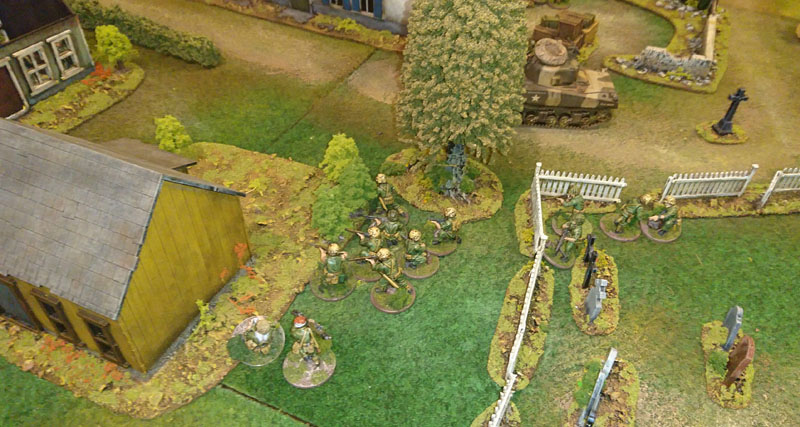 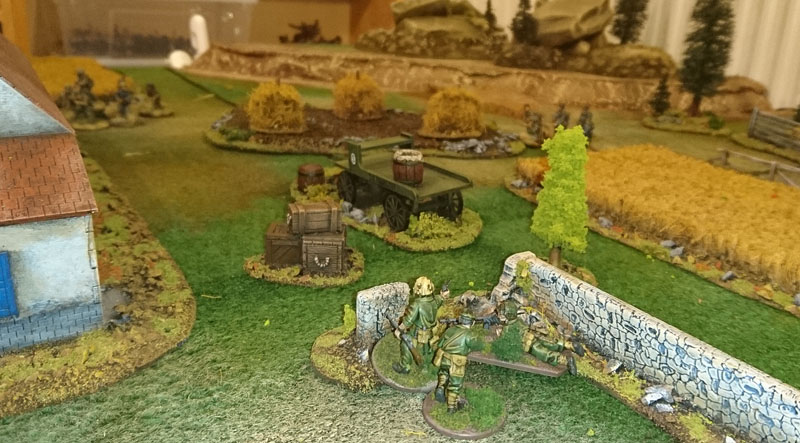 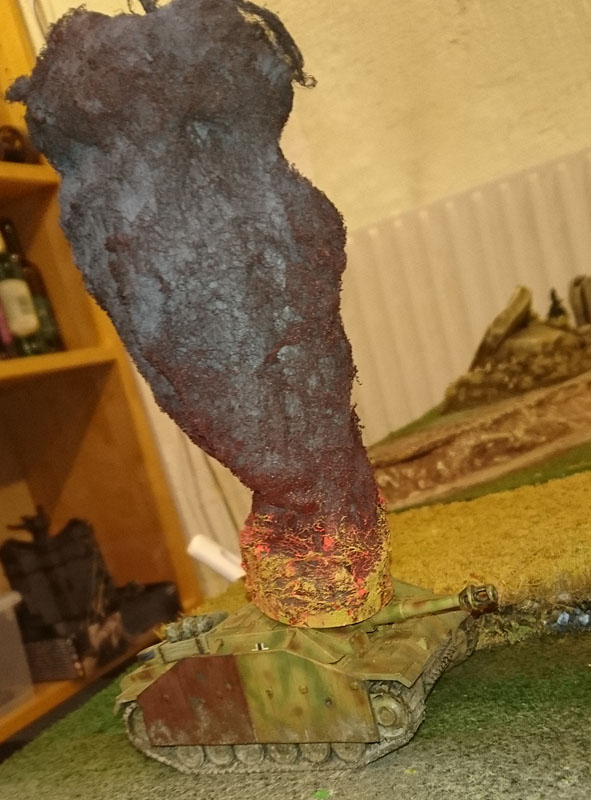 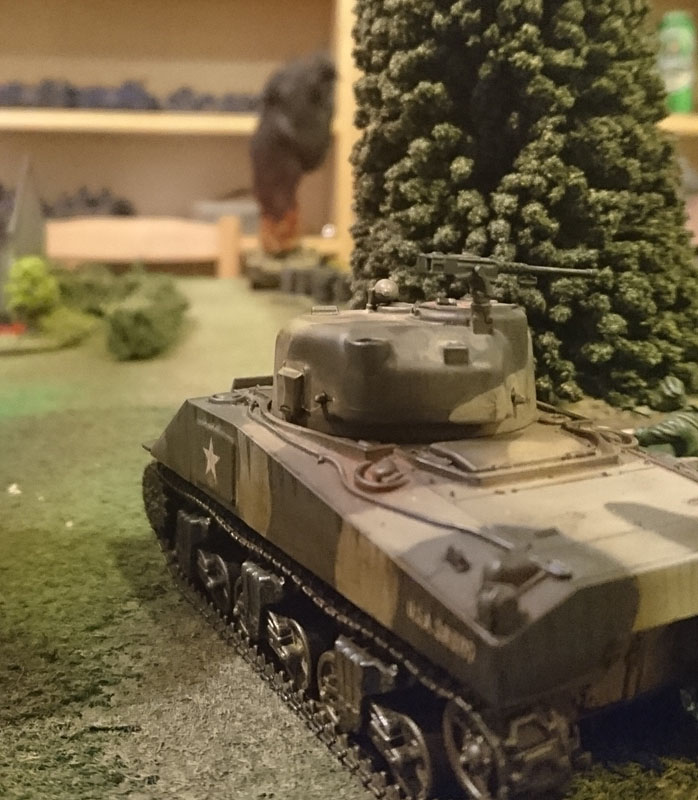